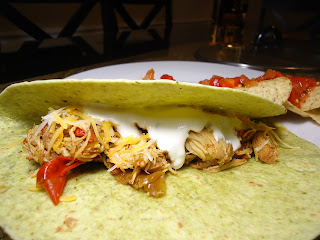 I know, another Crock Pot/Slow Cooker recipe. I apologize for the monotony. It is just that once I take that big ol’ magic machine out, I am more likely to use it. You agree?
So since I haven’t put it away since BBQ Beer Chicken, I decided to use it and hence, found this recipe. Verdict: it is a slam dunk worth a standing ovationJ


I added 1 ½ cups chicken broth but the original recipe calls for 1 ¼ to 1 ½- They came out juicy-uicy, but the amount of broth was significant so you sort of have to let the drippings drip before you layer on your fajitas. BUT, if you were to serve over rice, the results were perfecto! I, honestly, wouldn’t change the broth amount either way, but as your kitchen side-kick, I just want to keep you best informed. Enjoy...
Crock Pot Chicken Fajitas


Procedures:
1. Combined sliced onions and peppers in the bottom of greased Crock Pot
2. Lay chicken on top in single layer, and then add chicken broth
3. Sprinkle everything with salt, cumin and chili powder
4. Sprinkle lime juice over
5. Cover and cook on low for 8-10 hours, (FYI- I cooked for 10- they were great)
6. Uncover Crock pot, shred chicken with 2 forks, mix gently into juices and peppers/onions
7. Bring to table and assemble with the tortillas and toppingsJ 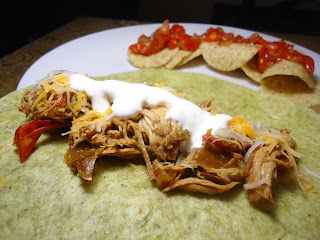