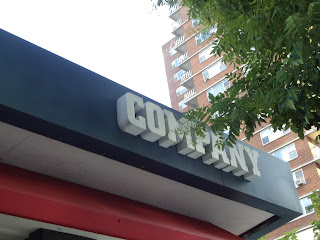 
More pizza, Gina?!? I know what you’re thinking, believe me I do. But even after eating way too many slices aboard The Pizza Patrol  or writing this review, or that review, or a Jersey Bites review , I always find myself craving a pie. Having visited the majority of the ones in good ol’ Jersey, lately I’ve been wanting some city pizza. Something about them sort of having their own genre if you will of pizza, I have a list of places I need to get to. I won’t bore you with that list, just know that for one, you can definitely find those places in my pal, Mr. Genovese’s newest book,  Pizza City and for two, I set my standards high. :)


So while I was in NYC last week for a blogging event, I knew it was the perfect opportunity to hit up one of the places I wanted to try.  It doesn’t take much anything to get Hubby to try a pizza place so after he stepped out of work and subway’d himself to meet me, we headed to my choice of the night. Co. or as the website states, Co Pane, was our destination. 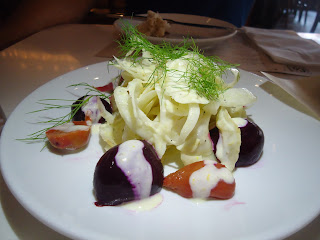 Nestled in Chelsea, this small and simple space, serves up some well known slices. When we arrived, although it was early, I was still a bit nervous about the lack of patrons. To me, when I don’t see a full restaurant or at least a more on the occupied-side than not one, I tend to have doubts. Apprehensively, I brushed aside my worries and took a seat. Within 30 minutes, I was glad I made that decision, let me continue….


We started with order of their Truccione Sar Bread with Ricotta ($6). My oh my, if you are anti-carb, you need to let loose and indulge here. The darkened rustic and charred bread was hearty and whole, which lent itself to my favorite way of eating bread- ripping it apart. The ricotta was creamy and seasoned just enough while being saturated with a glistening stream of extra virgin olive oil. We split a salad next and were again impressed. The option we went with was comprised of roasted baby beets, shaved fennel, toasted seeds and a citrus yogurt vinaigrette ($11).  Fresh, light, and dressed well, it left us and especially me, unbeknownst to the now lively and crowded restaurant surrounding us. I guess we missed the memo that no one in NY eats before 6:30. 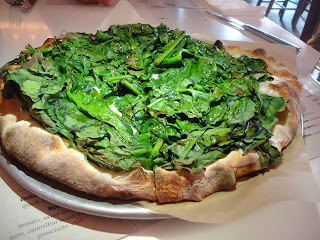 So even though through the first two courses, I knew it had to be us not the kitchen that was responsible for the empty tables, it was once we got to the “read goods” aka pizza, that I knew why I had already heard about this place. We went with two pies- one vegetarian and one not. That’s me being me and having to have a bit of variety on the table. If it were up to Matt, I think you know which one would have been ixnayed.


Anyway, we shared the Popeye ($17) and the Meatball Pie ($18). Just take a look, the popeye pie lived up to its namesake, no doubt. But what was more impressive than that, was the sublime-ness that awaited us underneath. Gruyere, pecorino and mozzarella cheeses were the platform for which this Popeye stood, the best platform I’m sure he’s ever come into contact with. Heck, I’d love to hang out in those cheeses all day! The crust had gusto and held up each bite from beginning one to last. Better yet, I loved how immediately the greens popped not only visually but tastefully, however once you continued to chew, the salty, oozy, and sharp cheeses invaded your sense of anything else going on. The meatball pie was next on my plate and this was a new version for me: veal meatballs, tomato, mozz, caramelized onions, olives, pecorino and oregano. No, I can’t say that again! But what I can do over and over is eat it! I didn’t think I’d be swooning over the meatballs as I rarely request them, but these balls of velvet were divine. Perfectly proportioned, each crumble of meat had me eyeing up my next bite. The olives were omitted as per Hubby but I had them on my slices, I thought they added a nice brininess against the sweet onions. The pizza, actually both ones, were timed right and nicely teetering on the well-done/but not burnt side. Bravo, I wish more pizzerias knew how to do this. 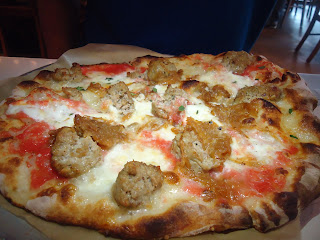 We skipped on dessert as catching our train was the next thing we had to conquer. We left Co. with some leftovers and a quick glance around the place. We realized every seat was taken and by the smiles on our faces and the feeling in our bellies, we knew exactly why. Oh and the now realized fact- New Yorkers eat after 6:00.

Email ThisBlogThis!Share to TwitterShare to FacebookShare to Pinterest
Labels: Co. Pizza- NYC, What I'm Ordering Up