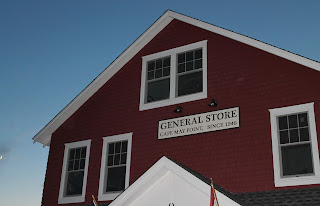 
In the past 3 weeks, I have called this place the wrong name too many times. I’ve said Red House, Red Door, and maybe only twice referred to it with its correct name- Red Store. It also obviously didn’t help that I recently ate at a restaurant called Red Knot just a few weeks ago. What the heck, do I need to look into the color of red or something?!? Anyway, even though I can’t seem to remember this spot’s name, I most certainly can remember what we ate. Food this good doesn’t slip the mind like namesakes do.


This is actually Part 2 in a 3-part series all based around Hubby’s _ _ birthday. Last week, I detailed Our Day in Cape May while today you will be in luck to read about our celebratory dinner.


After searching and searching for a reputable seafood BYOB restaurant in our area, I was left with little hope for a memorable meal. I decided to switch focus and start looking into French BYOB places. After making a few calls and finding out most places were booked, I went into my trusty NJ Monthly Top 25 Restaurants List, 2013 to see what I could find. This is where I found the write-up on Red Store. Seafood-check, BYOB- check, great reviews-check, open reservation for August 10- check. Done! Off we went…


As the name implies, it is somewhat of a store. Don’t fret though; the store is like a country convenience store that only takes up the first ¼ of the space. It is actually very cute and while your table is getting set, you can shop- nice touch. We didn’t specify whether inside or outside with our reservation so were a bit apprehensive about being placed al fresco. Again, no need to fret here either- the outdoor garden patio is covered, breezy and ridiculously romantic. I’d take a table there any day over their wood-plank floored and ceiling fan ventilated dining room.


The menu was small but definitely detailed and grand in its scope of cuisine. We decided to each go with the 3-course tasting menu. Even with 6 meals to pick between the two of us, we had difficulties deciding. So while we debated and discussed our choices, we enjoyed an order of the Artisanal Bread. The bread was decent, the butter was divine. Covered in course sea salt, it spruced up that loaf like a pro. 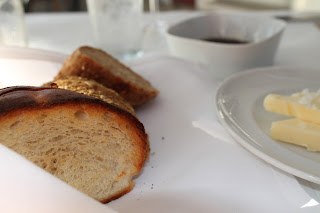 My first course was the Corn and Crab Chowder and what a way to start! It was, by far, the best soup I’ve ever had. Creamy, steamy, and seasoned perfectly, it had me at first spoonful. The corn was just ripe enough to let both the silkiness of the base and freshness of the corn shine.  Matt went with the Wagu Beef Carpaccio and was quite content with his choice. He admired the velvety richness of the paper-thin beef but honestly thought the arugula salad and Grana Padano cheese stole the show. 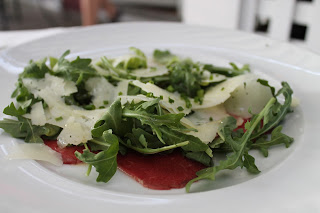 For the second course, I went with my old standby, Jersey Scallops. Laid atop a quinoa and pistachio taboulei, they were simply scrumptious. The tomato jam was a nice addition that added a welcomed depth of acidity but with fresh scallops, I am always one to adhere to the “less is more” mantra. Matt went with the Argentinean Style Spicy Empanadas and was then sitting next to 2 things he loved, (wink wink). The pastry dough was light and just-a-bit-buttery while the inside chopped meat was kicking with spice and personality. I especially enjoyed the cilantro crema as it both cooled and contrasted the spices. 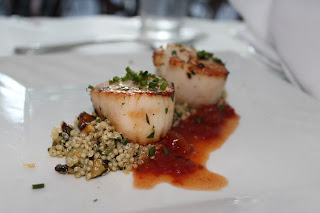 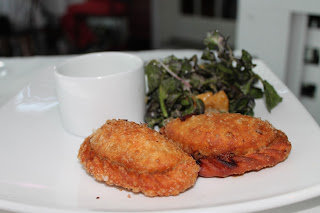 Dinners were next and we were definitely ready to get to the “main course”. Birthday Boy went with My Mother’s Ricotta Gnocchi with Crab while I went with the Grilled Flat Iron Steak with Duck Fat Fries. Yes, I just typed that- duck fat fries. My dinner was the better of the two indeed as Matt’s was a bit too one-noted. The creamy sauce and lump crab meat needed a burst of color or liveliness to cut through the deep and rich flavors abound. My steak was cooked to its requested medium-rare and was rather flavorful. The fries, ya know- the duck fat ones, were as you’d expect, delicious times a thousand. And although a bit too large for my liking, the crispy-fried edges were darkened and crisped just enough to counter the heavy starch within. 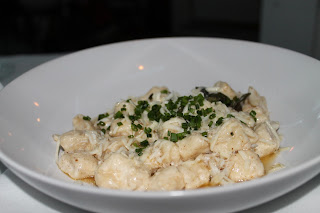 As with any birthday dinner, we were more than willing to stay for dessert but were surprised to not see nor be offered a dessert menu. We didn’t ask the waitress either as it seemed that no one around us was satisfying their sweet tooth either. We paid our bill, thanked our wonderful waitress and trekked it back up the parkway. Our 2.5 hour drive was long without a doubt, but we filled it with tasty conversation about not only our next trip back but to how we could replicate that chowder in the meantime. Funny, we still haven’t attempted that recipe nor have planned that trip…..Frankly, I think we need to narrow our focus and just concentrate on getting the name right first!


So even if you can’t remember the name, here is the info you do need to know: Red Store is located at 500 Cape Avenue, Cape May Point, NJ 08212. For more information, please visit their website .

Email ThisBlogThis!Share to TwitterShare to FacebookShare to Pinterest
Labels: Red Store, What I'm Ordering Up