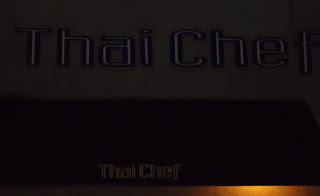 Thai Chef
Final Grade: A
Montclair, NJ
The other night I got the chance to try out a new restaurant, get together with two of my best friends, and get out of my little town of South Amboy on a Friday evening. The place we dined at was Thai Chef, a fairly well known Thai restaurant that has locations in Somerville, Hackensack, and Montclair. As both a BYO and reputable establishment, it provided a great venue and menu for us to experience.
The Bloomfield Avenue location is quite large, well-decorated, and brightly lit. The tables and rooms offer guests ample space and tranquility to escape to on any given night. In the summer, although we are sadly quite far from that now, there is an open patio for diners to sit and enjoy the warm weather. The wait staff was cordial and seemingly well experienced. We were seated right away even on a Friday and were given plenty of time to look over the vast menu, ask some questions, and consider the nightly specials.
We decided to start with a combination appetizer for two ($16). Now I know we were a party of three, but after asking our waitress if the “for two” plate was large enough for us to split, and her responding affirmatively, we went with the smaller portion. This was a wise decision, as the plate was generously filled with chicken satay, Thai Chef dumplings, spring rolls, and Mee Krob. The standouts of the platter were the dumplings and satay. The delicately wrapped dumplings were stuffed with shrimp and pork, then topped with fresh crab meat and served with a caramel vinaigrette. They were succulent while exploding with richness and flavor. The satay, more on the simple side, were a great counter to the rich dumplings and crispy fried spring rolls. The kebobbed pieces of marinated chicken were incredibly tender and placed in a perfect amount of peanut sauce that did not overwhelm nor understate the poultry.
﻿﻿﻿﻿               As for entrees, we settled on the duck pineapple ($22), flat rice noodles with shrimp ($13), and pad see ew($13). All were satisfying, yet two were frontrunners. The pad see ew, flat rice noodles with chicken, egg, vegetables, and a caramel sauce was delicious. The chicken was abundant and cooked with skill while the sauce had just the right amount of sweetness. Well coated noodles were dispersed throughout the plate, providing an enjoyable pairing for each piece of chicken and vegetable. The other noodle dish was the other winner here. Flat rice noodles with shrimp, an unassuming title, had much more pizzazz than the name lends itself to. For those of you who have had this dish before, one with basil, chili garlic and vegetables, you know that it can be very spicy. I have had it at a few other places and have had the unfortunate experience of numb lips after consuming. Although I was a touch nervous ordering it, I was delighted with its heat level after beginning to eat. It was definitely spicy, as it should be, but not to extremity. The noodles were tossed with enough sauce that both highlighted the basil and accentuated the shrimp. The vegetables, usually a bystander, were admirably crunchy and balanced the plump noodles. It was success on many fronts: flavor, heat, texture, and tenderness. The duck entrée wasn’t bad, it just wasn’t great. The meat was juicy yet the skin was doused in sauce. In fact, the entire dish was drowning in the salt-laden dressing. Cashews and pineapples offered decent texture points but with the small amount of rice, the sauce truly overpowered the dish.


﻿ ﻿ ﻿            Originally, we were not going to get dessert. We were quite full and just enjoying each others’ company. But then one of us spotted the chocolate Grand Marnier soufflé ($8) and it just had to be ordered. And man, were we glad we did. It was exceptional. Arriving at our table piping hot from the oven, covered in fresh whipped cream, then poured over with a chocolate sauce, it was almost too pretty to start forking. After snapping its picture, we devoured this specialty. The dense chocolate cake was moist and ever so rich. Each bite, warm and paired with cool whip cream, was better than the one before it. It was gone before we knew it and eventually found ourselves scraping the ramekin’s sides looking for one more crumb. Needless to say, if you try this restaurant, you must try this dessert.
﻿           All in all, it was a wonderful dinner. With the menu being so lengthy and the specials explained by our waitress all sounding delish; a return visit is a necessity for me. I found the establishment to be quite a find and it was easy to see why it has other locations. Although I might succumb to a few dishes I know are great, I am excited to try some other dishes from this “Thai Chef.”

Email ThisBlogThis!Share to TwitterShare to FacebookShare to Pinterest
Labels: Thai Chef, What I'm Ordering Up