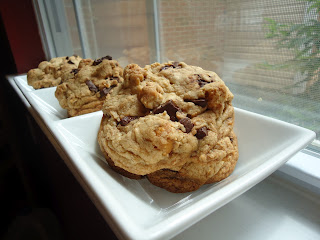 You know that face when you are eating something and you can’t exactly figure out what it tastes like? You know, you kind of squish your lips together, take out whatever you’re eating, look at it, look at someone else, then bite it again to try to figure it out? Well, I think these cookies with produce this reaction, in a good way of course. And the ingredient no one will be able to get will be caramel popcorn. Yes, the treat that is just fine and dandy all by itself, no alternations needed. Until now… because it is also the same treat that when thrown into a chocolate chunk cookie dough, it transforms into something so much better than when it was just in its bag.
Alas, here is the recipe that I used…..I found it on Annie's Eats, an insane I-can’t-imagine-how-she-does-it food blog. Anyway, I had caramel popcorn just chillin’ in my cabinet since Christmas and needed to do something productive with it. I saw this post and added it to my favorites and viola, here she is. I tweaked it a bit but it is pretty much the same. Her recipe yielded 20-22 cookies, I super-sized mine I guess because I wound up with 15 chucksters! Either way though, they were downright delicious. I served them broken in half on top of French Vanilla ice cream over Memorial Day weekend. All cookies were enjoyed as was the what-was-in-that conversation that followed. I eventually gave in and enlightened them on the contents. As suspected, they all claimed that was what they originally thought…..yeah yeah yeah….. I simply smiled and nodded. So with that, I encourage you to try these, see what your friends say, and be entertainedJ Enjoy…. 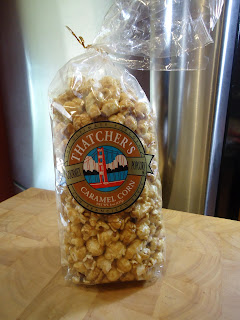 
OBJ: TCW be able to use up the bag of caramel popcorn in her cabinet


Procedures:
1. Preheat oven to 325 degrees
2. Line 2 baking sheets with either parchment paper, silicone baking mats, or just spray with nonstick baking spray
3. In a medium bowl, combine the flour, salt, baking soda with a whisk, set aside
4. In the bowl of an electric mixer, combine the butter and sugars. Beat on medium-high speed until well combined
5. Mix in the egg, egg yolk, and vanilla until smooth
6. With the mixer on low speed, stir in the dry ingredients mixing until just combined
7. With a rubber spatula, gently fold in the chocolate chunks and caramel popcorn
8. Roll a half-cup of dough into a ball. Holding dough in fingertips of both hands, pull apart into 2 equal halves. Rotate halves 90 degrees and place on baking sheet with jagged edges facing up. Leave space between each piece. Repeat with remaining dough 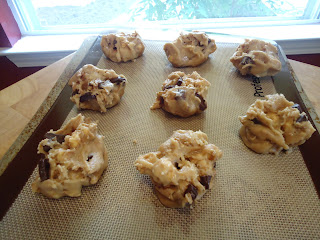 9. Bake, rotating after halfway through baking, until cookies are light golden brown, with puffy soft centers and harden edges, about 20 minutes total 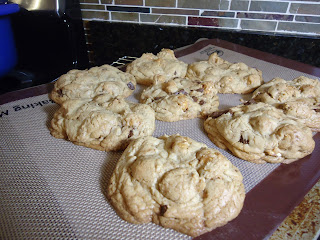 10. Let cool on cookie sheet for about 10 minutes, then remove to cool completely on wire rack. Store in airtight container 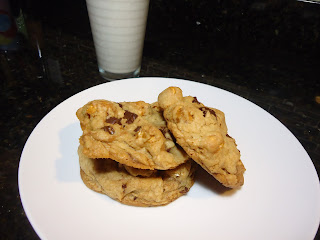 Email ThisBlogThis!Share to TwitterShare to FacebookShare to Pinterest
Labels: Dessert, What I'm Cooking Up